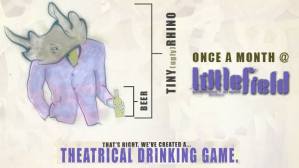 TinyRhino is: The Theatrical Drinking Game.

This month, we are excited to present six brand new plays with “TinyRhino: Ghost Stories”. Don’t be scared. Here, have a drink.

Tickets are $10 and include one FREE beer.
Costumes are ENCOURAGED!

THE PLAYS:
– The Story of Golem & The Pathetic Girl
Written and Directed by Becca Schlossberg

TinyRhino is UglyRhino’s take on the ten-minute play festival. Every month we commission six playwrights to write new plays, each including the same five dramatic elements. If you join us for TinyRhino, you’ll be given a list of these elements. They might show up at any time, in any order, and with any frequency. When they do show up, do you know what that means?! DRINK!